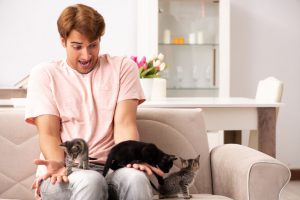 The expressions we use add a touch of sparkle to everyday existence. I use them liberally and recommend you do as well. There’s nothing quite like a slightly eccentric turn of phrase to make a girl (or guy) seem funnier, smarter, and more approachable.

Even if you haven’t seen the legendary video, hearing someone say “Confound it, this entire project has been like herding cats” calls up a delicious image of cats running everywhere—hissing, spitting, scratching, and refusing to be corralled. Applied to the work world, the expression suggests rampant disorganization, poor communication, egos unchained, and milestones blasted to smithereens.

When you think about it, expressions create neat little videos all ready to run whenever you close your eyes and say the words. Picture, for example, “as independent as a hog on ice.” According to Evan Morris, The Word Detective, this lovely phrase expresses the hog’s predicament perfectly. “While he’s technically free, his trotters can get no traction on the ice…and he’s more than likely to end up splayed helplessly on his belly, easily recaptured and returned to his pen.” What a picture.

One last example before I let you go: “Couldn’t find their butt with two hands and a flashlight.” Now, I’m aware there’s a cruder version out there, but this one suffices. I don’t know about you, but I see a confederacy of bumblers, who don’t necessarily realize that they’re clueless.

So, expressions are wonderful because they add some fun to language, and they’re marvels of efficiency. The words serve the visuals, and the visuals return the favor.