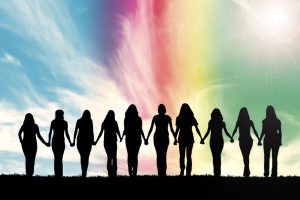 Sisterhood is the topic in Anne Welsh McNulty’s article “Don’t Underestimate the Power of Women Supporting Each Other at Work.”

Early in the article, she mentions making several attempts to ask a senior-level woman at a Big Eight (now Big Four) to go to lunch with her. The rejoinder? “Look, there’s only room for one female partner here. You and I are not going to be friends.” Ouch. And yet I bet many readers of this post have had similar experiences.

She notes that when she graduated from college in the ‘70s, she believed that women had “arrived” and viewed the lack of women at the top as a “pipeline” problem, not a cultural one.

Here are a few factoids from her article:

Ms. Welsh McNulty’s response to these inequities has been to host women-only lunches and to create open channels of communication. “Coming together as a group made people realize that their problems weren’t just specific to them, but in fact were collective obstacles … It reassured us that though our jobs were challenging, we were not alone.”

Ms. McNulty wants us to speak up “vocally, loudly, and proudly” even though research shows that women are “penalized for trying to lift each other up.” I agree, though advocacy is not an easy task. Discrimination against women is so institutionalized in places as diverse as Hollywood and Silicon Valley that it’s still not a surprise to find Queen Bee syndrome among those who have made it to the top or close to and in women’s organizations that claim to support women.

I recently finished writing a short story in which one of the characters, a bright and ambitious young woman, decides to marry a man she doesn’t love. Her game plan is to  time gestation so she may never have to go back to work. An interesting approach but not one that will work for many of us. Developing smart and strategic orneriness seems like a better option.