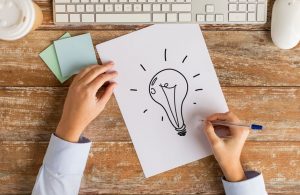 Idea theft? Well, that’s when you’ve brought up an idea in a meeting only to be ignored and then, later on, hear someone else present the same idea and get credit for it. Annoying, isn’t it? And really, more than annoying, because good ideas and, in my opinion, the ability to present them, are career-impacting.

Patty Azzarello (@pattyazzarello) of the Azzarello Group proposes steps you can take in her blog post “When someone steals your ideas,” and they revolve around this simple rule: Don’t hesitate. Don’t lose your momentum by worrying about whether or not you should speak, focusing on your fears, or being concerned that you won’t be listened to.

Ms. Azzarello says, “If you hesitate you give the crowd a chance to react to the other person stating the same idea — and then you have lost it. The idea will now be associated with them.” So you immediately thank that person for articulating the idea you presented earlier.

Ms. Azzarello notes that you need to learn to interrupt. She says, “Observe people in meetings. See how much of the talking that gets done actually comes in the form of interrupting. It’s a lot.” Just as important, if you present your idea and everyone just moves on, it’s likely that they interrupted you to do that. You need to respond by interrupting the person who interrupted you. This sounds dire, and yet it doesn’t have to be. Ms. Azzarello’s example is to say, “Hang on, before we move on, we really need to consider this idea.” That’s mild-mannered and non-belligerent, which is likely what you need to aim for in this situation.

Swim against the current

You also need to become accustomed to “swimming upstream.” As a woman technology, Ms. Azzarello became adept at this. She comments that you will persist because you want to be heard and that ultimately interrupting and not hesitating will become more comfortable. She also points out that idea theft isn’t solely the province of women; it happen to men who are not naturally assertive and to both men and women whose first language is not English working in global companies.

If you want to present an idea in a meeting, prepare yourself. Ms. Azzarello suggests data, benchmarks, or a customer story. That way, you come across not only as the owner of the idea but also the person who has done the work.

If you can’t reclaim your idea during the meeting, follow up with the thief afterward. Ms. Azzarello’s dialogue is so gentle and effective that I quote it in its entirety. You can say something like, “I’m pleased that you were able to get this idea over the finish line. It’s clear that I really support this idea, since I brought it up earlier in the meeting. Now I’m excited to help put it into action. How can I help?” This is a very kind way of letting your colleague know that what he did is not ok with you. (Yes, I say “he,” but I’ve run into adept female idea thieves.)

Ms. Azarello ends her post by commenting that getting your ideas recognized and credited properly takes behavioral change but “if you are willing to work through the initial discomfort, you can absolutely change the dynamic.”