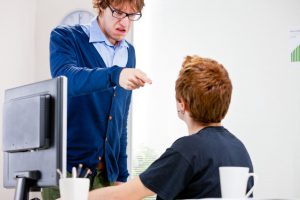 As our society becomes increasingly less civil, it’s no surprise that academic researchers are turning their attention toward workplace incivility.

Given our experiences of incivility at work, this is a topic we should want to know more about. In their Harvard Business Review article, professors Taylor, Kluemper, Bowler, and Halbesleben enlighten us with the results of research they did on “Why People Get Away with Being Rude at Work.”

Before delving into their results, they note that those on the receiving end of rudeness are less engaged in their jobs, experience mental and physical health problems, and are more likely than others to burn out and quit. And, horrifyingly, an estimated 98% of employees experience rudeness, interrupting, exclusion, and other bad behavior during a year’s time.

The researchers set out to look at how people in positions of power see victims and instigators of misbehavior. They started their investigations with a chain of casual dining establishments, asking employees to list coworkers who had been rude to them—as well as those they had been rude to. They also asked managers to evaluate employee behavior.

Interestingly, employees who reported that they were victims of rudeness were seen by their managers as rude. Just as interestingly, employees seen as rude by their peers were not seen that way by their managers—perhaps because they performed well or had a tight manager-subordinate relationship. In “real life,” I’ve seen the concerns of the victim brushed aside, because of the organization’s perceived need for the skills of the rudenik and the victim’s backing off for fear of being viewed as a troublemaker.

The professors recruited working adults from their undergraduate students’ pool of friends and family. These folks reported in an online survey how often they experienced rudeness at work and how often they dealt it out. Their managers then rated their behavior. Across industries and job descriptions, behavior was essentially the same. An interesting point: victims of rudeness may be rude themselves, so managers who blame the victim may actually be evaluating their behavior correctly.

To rule out bias, the researchers separated employees experiences of rudeness from their acts of rudeness by asking participants to imagine that they were managers who had been asked to evaluate their subordinates’ on-the-job performance. Given fictitious employee profiles that described performance and demeanor, these pretend-managers typically evaluated victims as misbehaving. Even when their profiles presented them as doing nothing wrong, they were still blamed for their mistreatment.

And, the researchers note, it gets worse. Victims of rudeness were seen as performing worse that those who had not been mistreated, regardless of their actual performance. (I think I can explain this one: The “noise” around victimization creates negative attention and energy, which inclines others to make negative evaluations.)

Negative evaluations based on bias are a significant problem. The researchers note, “As performance ratings often have a substantial impact on compensation and promotion decisions, our results show that victims of workplace mistreatment can be adversely impacted in several other important ways, adding insult to injury.”

So, what to do? Professors Taylor, Kluemper, Bowler, and Halbesleben recommend that managers receive training similar to that of judges and arbitrators, where these professionals learn to tell the difference between relevant and irrelevant information. Managers should also be trained to be aware of the forces that influence their decisions—a tendency to regard people of certain ethnicities as exhibiting certain negative traits, for example.

Susan is a talented writer who helped me rework much of my marketing material. She took my blah prose and turned it into something with impact yet still precise. I highly recommend her. She also works very fast — completing all projects ahead of time …